The Rudder vs Skeg-The Ultimate Debate That Helps You Decide

If you’re into paddling and kayaking, you know what’s coming next. As a kayaker, you may have had to decide already which one to use when going out on water.

The rudder vs skeg- why the debate?

Truth be told, an experienced know-it-all kayaker is going to state that no true kayaker is ever going to need to use a rudder nor a skeg. Even though we’re not saying the opposite, we’re pretty sure that kayakers have different levels of skills, and that’s absolutely ok. As each of these systems comes with ups and downs, taking a closer look at each of them is going to clear out the things for you and, maybe, change your perspective.

Ideally, a well-designed sea kayak is going to track well, in straight line, with minimal need for major paddle corrections. A reliable model is also going to turn nice and easy, only by using the turning strokes. However, you cannot have both at the same time and you’re going to need to sacrifice the good turning ability for the good tracking and the other way around. You’re a good paddler if you know how to lean/edge the boat on its side, using the increased rocker and helping your boat to turn.

This may look rather simple on a sunny day, but what happens when you’re paddling on a windy day? The risk for a kayak to weathercock in cross winds and quartering winds is higher, so you’re going to have to turn into the wind. A kayak isn’t going to take the shape of the waves, which means that is going to turn sideways to the waves. As a matter of fact, any well-designed kayak is going to weathercock. This happens because the bow is cutting through the peaceful water, holding the bow in place as the stern rides through restless water, getting blown around. your kayak is going to need some paddle stroke corrections for compensating for the weather cocking. All kayaks are going to broach in following seas, needing corrective moves from the paddler.

Can you see now why you may need a rudder or a skeg?

What is the main difference between a rudder and a skeg?

Attached to the stern of your kayak, the rudder is a blade that is capable to pivot from side to side. You use the foot pedals in the cockpit for controlling it as they are connected to the rudder with some stainless steel cables or some powerful cord. Designed to lift up out of the water through a cord system, the rudders are typically fold up out of the way on the rear deck.

Dropping out of a slot in the kayak’s hull, near the stern, the skeg is a retractable blade that cannot pivot. It may drop and retract thanks to the slider placed on one side of the cockpit.

How do they work?

Bear in mind that the function of rudders and skegs isn’t that easy to understand. The most important part about both of them is that you don’t really need to use them. They’re accessories that can help you when conditions take for the turn. It’s pretty common for an entry-level kayaker to think that the rudder has to be used all the time for steering the boat.

This is true only on some level (which also counts as a point for the rudder when competing vs, the skeg), as its main role is to maintain your boat on a straight path. You use your feet for controlling the rudder; press the left paddle and the kayak is going to turn left; press on the right one when you want to turn right.

Another misbelief about the skeg is that you have to use it for making your kayak track straight. We cannot stress enough: this is true, but the skeg is going to help you “trim” the kayak when it gets windy and you cannot control the boat anymore. Let’s remind you once again that a well-designed kayak is going to weathercock in the wind and it’s going to turn into the wind when the skeg is up. Lowering the skeg is going to make the stern pin in the water, helping your kayak turn downwind. If you lower the skeg only partially, the kayak is going to get “trimmed” for handling the quartering winds and crosswinds a lot better. therefore, you’re able to do all sorts of fine adjustments for trimming the boat, according to the new conditions.

Why use a rudder?

You’re going to take the best out of a rudder in the following seas as you get the possibility to steer your kayak with your feet, lowering the risk for broaching. You get to preserve your energy and use it for paddling forward. You only realize its importance when you’re out there on a windy day and you lose it, ending up by getting too tired from trying to keep your boat from broaching. Don’t think that a lightweight kayak isn’t going to broach. No matter how light it is, you’re never safe on a windy day.

Many racing kayaks (flat water and surf skis) feature rudders as this way you’re going to preserve your energy for paddling forward and not waste it on corrective moves.

It doesn’t matter if you’re a purest or not, you’re definitely going to enjoy the utility of the rudders when the weather gets worse. It’s just a lot better for your energy and strength.

What are the downsides when using a rudder?

The most important downside when it comes to rudders is their high risk for failure, whereas skegs stand out as more reliable simply because they contain less moving parts.

Let’s get things straight: both system may fail at some point, but it happens more in the case of rudders. You may very well paddle for decades until a rudder fails on you, but you should always check the rudder and the its cables before you go out there. No matter how much you payed for your kayak (by the way, if you want to pay less than $700, here are some solid options to check
https://truthreels.com/best-fishing-kayak-reviews/under-700/ ), you should play it safe every single time. any sign of corrosion, fraying should warn you and you should replace them asap. Carrying some spare cables and the tools for changing them isn’t a bad idea either. Should a rudder cable break as you’re blowing downwind in a tough sea, you may put yourself in a sensitive position. You may not have a solid foot rest to use soon enough. Some new design feature fixed footrest and you control the rudder with an individual hinged toe plate, reducing the possibility for a failure.

Another risk for taking into consideration is the higher risk of damage in case of a collision. Many are leaving them down while backing up and end up ruining them so remember to raise the rudder before backing up.

you should use the skegs for handling your kayak in windy conditions more efficiently. However, keep in mind that skegs cannot provide the same level of control as rudders. At the same time, they may not get damage in a collision as they’re placed under the boat. You need to practice caution and to always raise them when backing up in a shallow water or landing.

As they’re placed under the boat and one cannot see them, they change the looks of the kayak for the better, which may be a selling point for many kayakers. 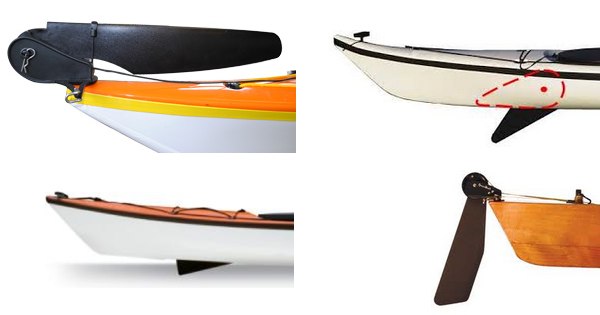 Even if they may not get damaged in case of a collision, the skegs to pose some risks for the mechanical issues. It’s quite common for small stones to get stuck in the skeg, jamming it. You can actually kink the cable as you try the un-jam it with your slider, worsening the whole situation.

Paddling your kayak is supposed to be both challenging and fun. No matter the type of kayak you’re using, which of the two systems you’re going with, enjoying the whole kayaking experience is fundamental. Make sure that you stay on the safe side and learn how to paddle, how to get into control over your boat without using a rudder or a skeg. Knowing how to control your kayak without using them can make the difference between life and death on a terrible weather.

Truth be told, none of the systems we’ve talked about can be seen as “the best”. We can only say that some designs are going to work better with each of them. A longer boat is going to be a bit more difficult to turn, in which case a rudder is the better choice. Luckily for all kayakers, many kayak manufacturers include a rudder or a skeg, so you don’t need to give it a good thought. You can find great models for less than $500 that feature one of the systems, so it’s not a matter of money either (https://truthreels.com/best-fishing-kayak-reviews/under-500/)

Be that as it may, it’s really a matter of personal take, based on the type of paddling you’re doing most of the time.

Kayak Possible Dangers And Solutions For Avoiding Them

How To Avoid A Kayak Flipping Over

How To Avoid A Kayak Flipping Over

The Rudder vs Skeg-The Ultimate Debate That Helps You Decide

Kayak Possible Dangers And Solutions For Avoiding Them

Kayaking When You’re Not A Swimmer- Here’s How To Do It!